Reading Thucydides’ History of the Peloponnesian War with Bookship

My mother passed last year from complications due to ALS. She was unfailingly in good spirits during her battle with the disease, even knowing it was a terrible, fatal, incurable disease. My favorite saying of hers: “this ain’t gonna be no pity party”. For her eulogy, I stole a quote from Thucydides — I don’t know whence I knew it, as I’d not read the book at that time. The quote, from Pericles’ Funeral Oration:

The bravest are surely those who have the clearest vision of what is before them, glory and danger alike, and yet, go out to meet it.

Prompted by that, and together with a dear friend and nephew, we set out to conquer Thucydides, using my app Bookship to share our thoughts while we read. My friend lives in Utah, my nephew was stationed in Okinawa, and myself in Massachusetts, North Carolina, Virginia, Hawaii or elsewhere depending on the week — so a virtual book club app seemed perfect.

I wanted to set down my final thoughts on the Book here as well as the experience of reading through Bookship — my interim reactions as I read are captured in my Bookship notes, which are only available to reading group members.

The History is an imposing book, long and full of strange places, innumerable tribes and cities and islands and mountains. The Peloponnesian war lasted 27 years, covered most of the Mediterranean, and laid waste to countless lands, tribes and peoples. I cannot recommend highly enough the Landmark Edition of Thucydides, edited by Strassler. The maps alone are worth the price of admission; the glossary, the appendices and commentary, all of them together make this work accessible to the modern reader in a way no other edition can match.

The History is laid out in 8 “books”, or chapters. We set ourselves to read one book per month, or 8 months in total. In the end we finished in 7 months, slightly ahead of schedule. Our starting time was fortuitous as Thucydides was uncharacteristically in the news, in the early days of the Trump administration, especially in regards “The Thucydides Trap” — the lesson from Thucydides that when an upstart power (China in our time, Athens in Thucydides’ day) rises in competition with an established power (the United States, Sparta respectively), war is a natural and likely outcome. As Thucydides says: “It was the rise of Athens and the fear that this instilled in Sparta that made war inevitable.” Or as Foreign Policy magazine put it: “The past 500 years have seen 16 cases in which a rising power threatened to displace a ruling one. Twelve of these ended in war.”.

I seriously doubt I would have finished had we not been reading in a group — the social pressure to keep going was essential, at least to me, and I found the the updates and alerting from Bookship invaluable in keeping me going when I lost momentum. Much of the book reads something like <Army X> marched to <Region with strange name> and fought <the tribe with strange name>. They were victorious and set up a trophy. It can be quite repetitious in places, particularly in the early books, when the names and locations are all mysterious. So some motivation to continue was welcome. 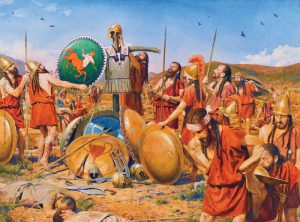 Side note: From Thucydides I learned the origin of the word trophy: when a Greek army was victorious, they would stand up a figure with helmet, armor and shield of the defeated army to mark their triumph. The Greek word is tropaion.

A few key themes are explored throughout the book. As mentioned, the tensions between a rising power and an established one is the most obvious. Sparta feared Athens, especially her naval might, which might blockade or control the entire Mediterranean, leading Sparta to act from fear. It’s a war of contrasts: the Spartan land warfare prowess vs. Athen’s naval might. The democracy (and mob) of Athens, vs. the oligarchy of Sparta. The assertive, aggressive, democratic Athens vs the conservative, xenophobic Spartans.

The innate characteristics of Athens and Sparta often led to their troubles — the Athenian democratic mob turning on Alcibiades (and later turning for him), Sparta’s oligarchy trying to rescue some of their own in the disastrous battle of Pylos, nearly leading to their surrender to Athens.

More subtly, much of the Peloponnesian War is fought as a proxy war between client states — Corinth in particular, a Spartan ally, was a hotspot early in the war. One can’t help but think of the Cold War battle between the US and the USSR. More generally, as one reads, one can’t help thinking “the more things change, the more they stay the same”. Although — the brutality of this war eclipses much of modern war, especially in victory — the Geneva Conventions for example stand as a contrast to much that transpires in the History.

The Melian Dialogues are a interesting point here — this is a dialog between Athens and the Melians, a tribe that would not submit to Athens. It is a negotiation wherein Athens requests the Melian surrender — the famous line occurs here: “The strong do what they will, the weak suffer what they must”. Thucydides may have been the first realpolitik, in his portrayal of how countries have an inherent “gravity”, a force of self-interest, that causes them to do what’s in their interest and what they can get away with. The Melians meet a chilling, if not entirely unexpected ending, after refusing surrender. After losing the battle, “the Melians surrendered at discretion to the Athenians, who put to death all the grown men whom they took, and sold the women and children for slaves, and subsequently…settled the place for themselves.”. This brutality is not limited to this battle.

I was also taken by two (perhaps unintended) lessons from the book — how often stupid mistakes drive history, and how much a single, extraordinary person can alter the vector of history.

In the “stupid mistakes” category, the disastrous Sicilian Expedition, the beginning of the end for Athens, was the result of a near comical internecine battle between Nicias and the mercurial Alcibiades, wherein Nicias eggs on the Athenians and the projects to extreme levels in hopes of forcing an abandonment of the project, only to find himself in charge of it! The defeat of the Athenians could also later have been avoided had the commander anticipated obvious events, thus preventing the Spartan general Gylippus from taking control of the Sicilian forces, leading to Athens’ defeat.

In software engineering, it is well known, if not exactly proven, that the best software engineers will have 10x the output of the average developer. Those people are like gold, especially in startups. History appears similarly here— extraordinary people often have an outside impact on events. Alcibiades is perhaps the most interesting and impactful individual in the History, but Brasidas (on the Spartan side) is also quite interesting, driving the Spartans to success in spite of circumstances to the contrary. And as Thucydides says, he was “not a bad speaker for a Spartan”.

I found Thucydides’ portrayal of the Spartans quite interesting (Thucydides was an Athenian, albeit one who was exiled for his failure in the Amphipolis campaign, arguably not his fault). These are not your father’s Spartans, if you’ve seen 300 or read Gates of Fire by Steven Pressfield, one of my favorite books. Pressfield’s Spartans are like Boy Scouts with Swords —ethical to a fault, invincible in battle, near superhuman, proactive. Thucydides’ Spartans are duplicitous, political, risk-averse to the point of cowardice.

Thucydides’ prose can be ponderous at times, even in translation. But the book improves markedly as it progresses — while the first few books were a struggle, the later books simply fly by. Thucydides was a general before he was an historian, and his writing seems to improve with each book. He can at times be quite eloquent (from Pericles’ Funeral Oration):

Thus choosing to die resisting, rather than to live submitting, they fled only from dishonor, but met danger face to face, and after one brief moment, while at the summit of their fortune, left behind them not their fear, but their glory.

Since we took 7 months to read the History, I had the opportunity to read a few related books along the way that are worth mentioning. Alcibiades is perhaps the single most interesting and pivotal figure in the History. He was an Athenian leader, but after the disastrous Sicilian expedition, was recalled home (with the expectation of being executed). He escapes, and goes to Sparta, where miraculously before long he is leading much of Sparta’s activities. And in the end he will return to Athens, switching sides again. He’s a mercurial figure of questionable ethics but unquestionable leadership ability. He is the subject of Steven Pressfield’s Tides of War, which is an amazing read and case study in leadership tactics (my thoughts on that here). I read it again alongside Thucydides and it was very complementary. Kagan’s The Peleponnesian War is an invaluable historical companion. Frank Yerby’s Goat Song is an enjoyable, somewhat tacky historical adventure set in this era.

Some final thoughts on the act of reading together via the Bookship app. As mentioned above, I doubt I would have finished this book without the gentle peer pressure of reading in a group with app to share experiences and get prompts on how I was reading. More importantly, insights and questions from my friends really enhanced the reading, and I really enjoyed this reason to stay in touch. My nephew asked a question we did not know the answer to, so I sent a mail to Dr. Victor Davis Hanson, who wrote the preface to the book, and lo and behold, he replied with the answer! (note: even very well known authors often answer their emails — send them one!). Bookship is a mobile app without a website per se — I found that entering long comments or quoting/referencing other websites became cumbersome — I wanted a web version where I could use a more desktop editing process.

One thing I have learned over time — people value what they pay for, or what they have earned. This was no easy read — I earned it — although it was quite enjoyable — I confess to a certain immodest pride in the fact that I finished this book :). And would say to potential readers, if you are reflective about history, or about today’s events, this is a book that will repay reading. Or as Thucydides puts it,

“I have written my work, not as an essay which is to win the applause of the moment, but as a possession for all time.”