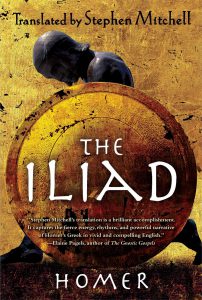 As I’ve taken to doing the last few years, at the Christmas season I like to look back on my reading for the year to see what stands out, and to think about about what I want to read in the coming year.

Some books stand the test of time, and I return to them again and again for various reasons. This year it was Shogun (some of my learnings from it here and here). And a few espionage classics: Legends by Robert Littell and Tinker, Tailer, Soldier, Spy by John le Carré. Both are dizzyingly plotted and wonderfully insightful into the human condition. I also went after Legacy of Spies, what was billed as perhaps John le Carré’s last novel, although now it appears we will get another one.

I read a great deal this year socially. Obviously, with my focus on Bookship, my social reading app, this is not a surprise. Two high points: I read The Iliad for the first time, along with friends & family. It took us the better part of six months to get through it. What you earn, you value, and I value The Iliad a lot. :). The thing that surprised me the most about it is how bloody it is. The descriptions of the battles and injuries is a bit horrific.

Together with my great friend Thomas, I read The Hunters, by James Salter. Salter is the best writer you never heard of, one of the true masters of the modern novel. This is his debut novel about fighter pilots in Korea during the Korean War, of which he was one. While the aviation and battle scenes are vividly rendered, that’s not what the book is about. This is about (young) men in competition, within their teams and with the enemy. The social dynamics of this kind of person are so well captured. The competition, the politics, the loves & hates, the self-doubt. The writing is everywhere very vivid and evocative.

“What is your ambition?” she asked after a while. Cleve closed his eyes. There had been many ambitions, all of them true at the time. They were scattered behind him like the ashes of old campfires, though he had warmed himself at every one of them.

A few other great books I read socially this year: Captain Blood, also with my friend Thomas, which is (along with Treasure Island) one of the seminal pirate novels, and When The Elephants Dance, by Tess Uriza Holthe, an historical novel of The Philippines in World War II, which my book club read.

Place was an important thing for me this year.

I traveled to Japan this year — truly an amazing trip covering most of southern Japan. So of course along the way I read Japan. Hiroshima, by John Hersey, South of the Border, West of the Sun by Murakami. South of the Border was my first Murakami, and it’s a melancholy book, but I loved it. And anything with jazz and cocktails as a big element can’t be bad. Shogun, of course, was part of that. And The Thief by Fuminori was a quirky modern thriller about a pickpocket set in Japan. I got in a little of Snow Country by Kawabata (which I’ve read before) — didn’t finish it this time, but it’s so atmospheric.

2018 was the year when we established Hawaii residency, so I did read a bit more about Hawaii. The Bishop Estate (the Bernice Pauahi Bishop Estate) is the largest landowner in Hawaii, established under the terms of the will of Bernice Pauahi Bishop, who was one of the last of the Hawaiian royalty. The estate funds the Kamehameha Schools, an extremely high quality private school serving (mostly) students of Hawaiian descent. Broken Trust chronicles the shenanigans of a number of less-than-ethical trustees of the estate, and provides a glimpse into the sleazy underbelly of the state government in Hawaii at the time.

We had a short side trip to Key West, so of course I had to read some Hemingway after we visited his house there. I chose To Have and Have Not as it is set in Key West. Hemingway was told by movie maker Howard Hawks he could make a great movie out of Hemingway’s worst book, which he declared was To Have and Have Not. I share his opinion, the writing is vintage Hemingway but the book is a scattershot of random plot elements. I suppose the movie is a classic though!

I did binge read a few things this year. I’ve nearly completed all of the Jack Reacher books by Lee Child. They are such comfort food and Reacher is such a unique character. This year it was The Midnight Line, one of the most recent books tackling (among other things) the Opioid epidemic — it’s classic Reacher, one of the best, and then a number of short stories, plus a few of the older books. I also devoured Joe Abercrombie’s The Blade Itself and the following two books. Like many reviewers, I found the books long on character and short on plot, but the wonderful black humor, Logan Ninefingers and Sand dan Glokta just kept bringing me back.

I’ve always had a bit of what W.H. Auden called “The Northern Thing”. So imagine my delight when I discovered a book featuring a Boston detective (I live part time in Boston) called to Iceland to investigate a murder involving…wait for it….J.R.R. Tolkien and a lost Icelandic saga. Can’t imagine a book more targeted to my interests. So with a plane ride coming up, I dove into Michael Ridpath’s Where the Shadows Lie. The title is a quote from Tolkien referencing Mordor (“in Mordor, where the shadows lie”). The book is such good fun. I won’t spoil it, but if Tolkien or mysteries set in foreign lands or lost books and family secrets are your thing, give it a go.

I read a number of books simply dripping in critical acclaim, and found them very solid but not as amazing as I expected. In addition to To Have and Have Not, with Jemisin’s The Fifth Season and Nnedi Okorafor’s Lagoon I found myself entirely entertained by them but a bit mystified as to the huge critical acclaim they have received. There was a huge amount of noise about Blake Crouch’s Dark Matter. Again I very much enjoyed the book but the superlatives applied to it surprised me a bit.

Rather sadly I came to the end of the simply wonderful Lewis Trilogy by Peter May. The Outer Hebrides and Lewis Isle might be the biggest character in the novels, it is so well rendered, but Fin Macleod, the tortured detective at the heart of the books, is one of my favorite characters in detective fiction. I found the last in the series, The Chess Men, to be the weakest of the three books, but still wonderful.

Lastly, a wonderful book mixing two of my favorite things, cocktails and history: And a Bottle of Rum, a history of Rum in the Americas. I simply couldn’t put it down. So fun. So informative. Representative quotes from a traveler in Colonial New England in the heyday of New England rum: “All of us got most feloniously drunk.” “Went to bed about two o’clock in the afternoon, stupidly drunk”. “Spent an evening at the Tavern…. a confounded mad frolic.”. Now that’s travel!

Some books I Didn’t Finish (yet): In the Land of Giants, Hyperion, Mark Twain’s Following the Equator, Narrow Road to the Deep North, and Bowker’s Lawrence Durrell Biography. I hope to get back to all of them.

Now, what to read for this year?

I plan to travel to Rome and Paris this year, so likely will be doing some reading around those themes (recommendations welcome!).

I remain convinced that much of our online behavior, especially around social media, isn’t healthy for us. I hope to read more around that theme, including to begin with: The Attention Merchants, non-fiction exploring the underlying business model driving what I call The Outrage Machine, and Infomocracy (a sci-fi novel exploring the intersection of search & social media and politics).

And I’m sure I’ll hit my usual suspects of espionage, historical fiction, and maybe some near-future Sci Fi.