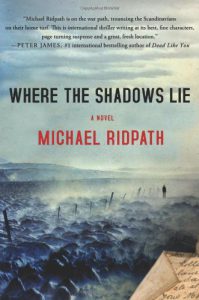 I’ve always had a bit of what W.H. Auden called “The Northern Thing”. So imagine my delight when I discovered a book featuring a Boston detective (I live part time in Boston) called to Iceland to investigate a murder involving…wait for it….J.R.R. Tolkien and a lost Icelandic saga. Can’t imagine a book more targeted to my interests. So with a plane ride coming up, I dove into Michael Ridpath’s Where the Shadows Lie. The title is a quote from Tolkien referencing Mordor (“in Mordor, where the shadows lie”). The book is such good fun. I won’t spoil it, but if Tolkien or mysteries set in foreign lands or lost books and family secrets are your thing, give it a go.

This is on the heels of my finishing up the Lewis Trilogy by Peter May, the final installment being The Chessmen, alluding to the historical Lewis Chessmen found, obviously, on Lewis Isle, and now in the British Museum. Fin McLeod is a troubled detective who returns home to Lewis after his child dies in Edinburgh. I love these books, and while Fin is the main character, the Isle of Lewis itself feels like the main character. Cold and windswept, with plenty of its own secrets, it parallels Iceland as a setting for interesting mysteries. And I LOVE the covers of these books. 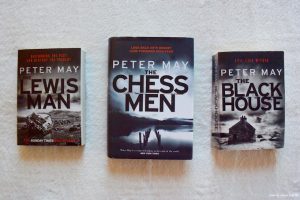 Finally to cap it all off, I’ve been watching Trapped, a Nordic Noir TV series set in Iceland. If you liked The Bridge, you’ll love it. Again featuring Iceland itself as a main character.