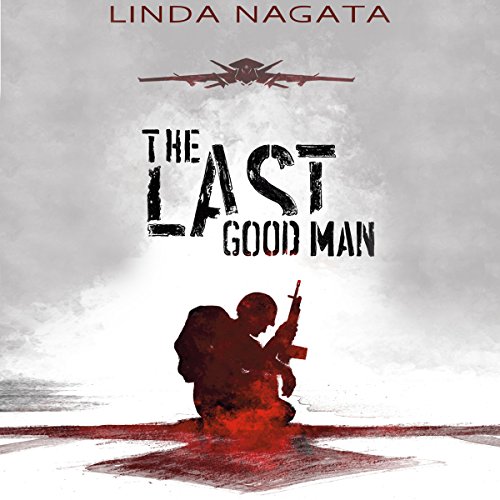 Although I’d been aware of Linda Nagata for a long time, I hadn’t read any of her work until the recent Red Trilogy. The Red Trilogy is simultaneously a thoughtful exploration of the impact of technology advances on soldiers and warfare as well as a rollicking near-future sci-fi adventure. The Last Good Man continues the exploration of “future war”, elevating the thrill ride aspect and downplaying the philosophical exploration. If you’re interested in a near-future Sci Fi book exploring what happens when machines fight our wars for us, The Last Good Man is for you.

True Brighton is a retired Army vet who is now Director of Operations for Requisite Operations, a private military contractor in Seattle— just don’t call them mercenaries, as they like to point out! As The Last Good Man opens, Requisite is being hired to recover a potential client’s daughter from an Islamic terrorist/gangster organization.

True — a near-middle aged woman — will shortly be leading a recovery mission in the Middle East, one that features a dizzying array of near-future warfare artifacts. Synthetic Digital Assistants, Drones, Robotics, Biomimetics (robots that mimic biological life forms – insects, birds, snakes..), TINSLs (Team Integrated Speech Link). While True is fully committed to Requisite and this message, she’s haunted by the brutal death of her son at the hands of a different terrorist group. When the rescue mission uncovers a potential link to her son’s death, she breaks ranks to find answers, and things rapidly spiral out of control.

True is fascinating character. A female combat leader, her character differs in perspective from many military sci/fi protagonists. As a middle aged warrior, she remembers the time before AI and augmented warfare, and is starting to see the end of that life for herself. As a semi-retired person, I loved this particular quote from True, it resonated for me personally:

“Yes, I know what ‘retired’ means. It means I get to choose my own missions”.

The first few chapters of The Last Good Man moved a little slowly for me — there was a bit too much setup, explanations, and a blizzard of acronyms and technical descriptions of things. Someone more geeky than myself might find that really interesting, but I wanted to get to it! But soon we’re in action in the Middle East and things are moving along.

True is on the trail of Shaw, who she thinks has information related to her son’s death. I found the Shaw character also very interesting, and wanted more of him. When he got to telling True the story she came for, the room I was in vanished and I was completely transported to the jungle where Shaw, Diego and others were mounting an expedition.

… We were twenty meters above a tangled regrowth forest — all bamboo and spindly trees — weedy shit that had popped up after the old forest was logged out. Under the rotor wash it looked like a seething, rain-blurred, bottomless chaos. The rain was coming down like nails. A gust hit us and rocked the ship. Diego’s hand tightened on my shoulder. He wanted to make sure I didn’t go over the edge before we had a rope…

..into the rainy jungle, with no visibility, laser range finders flashing through the darkness, killer drones nearly wiping out the good guys. From that scene until the end of the book, I was hooked and story accelerated right to the end.

The Last Good Man is much more of a thriller than The Red. In The Red, the AI is effectively a full-fledged character — albeit essentially offscreen (no pun intended!) — leading to some very thought provoking situations. In The Last Good Man, the tech is mostly backdrop for the characters, their conflicts, their time in life. I’m always a sucker for middle aged characters figuring out what comes next for them, and that question echoes through the end of the book. If there’s a philosophical underpinning to The Last Good Man, it might be “what happens to us when machines fight our wars?”. I would have enjoyed a bit more exploration of that question, but the book is awesome without it. If a near-future sci-fi thriller with a soul interests you, you’ll enjoy The Last Good Man.

(disclosure: I received a free review copy of The Last Good Man from the author in exchange for a fair review).